Stabilization vs. Reinforcement: What's the Difference?

The terms "stabilization" and "reinforcement" are often used interchangeably when discussing geogrids used for civil engineering applications. However, there are key differences in their definitions that have far-reaching implications. In recent years, certification bodies have begun to recognize these differences, giving engineers the confidence that the products and systems they specify are fit for their intended purposes. 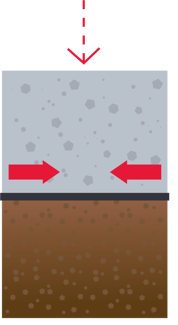 A stabilization geogrid has apertures (openings) that allow granular materials to interlock. This interlock confines the granular particles to keep them from spreading laterally when loads are applied perpendicular to the stabilized layer (and the geosynthetic). This is why stabilization geogrid is recommended for applications such as roadways - a stiffer stabilized layer resists rutting and improves bearing capacity compared to an unbound layer, so traffic capacity is increased.

The ISO defines reinforcement as: 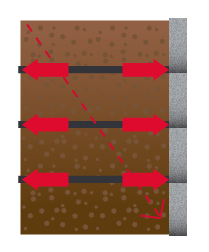 Use of the stress-strain behavior of a geosynthetic material to improve the mechanical properties of soil or other construction materials.

The stress-strain behavior comes into play when loads are applied continuously to a soil mass, like in a retaining wall or slope. The various types of stress which are applied to the reinforced soil mass are translated into tensile stress on the geosynthetic, and this provides additional strength to the soil. The design of these systems relies on determining where the failure planes are likely to occur in the soil mass, and using the reinforcement to prevent these failures.

What do these definitions mean for your next project? 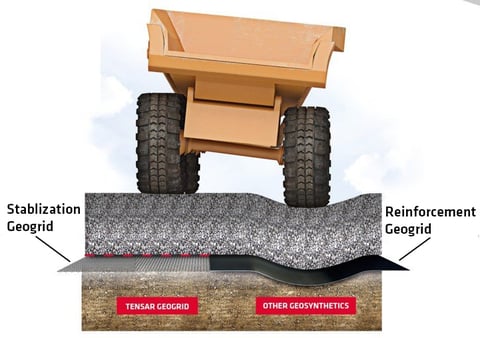 Some properties that are important for reinforcement geogrid performance don't apply to a stabilization geogrid. For example, many geogrid specifications focus on tensile strength as an indicator of better performance. When geosynthetics are used in applications such as the reinforcement of walls and slopes, tensile strength is an input to the design and correlates to in-ground performance. But, when someone is designing a road that will endure intermittent loads applied from above, confinement of the granular layer is far more important. Yes, a minimum tensile strength is needed to make sure the product can withstand aggregate placement and compaction, but performance depends on many other factors, none of which are directly correlated with tensile strength.

If you would like to learn more about comparing geogrids, especially for roadway applications, visit our resource center. There you will find supporting research and frequently asked questions to help you choose the best geogrid for your project.