Many tests have been performed comparing tensile properties of geogrids to performance in roadbed applications. Here are several references and highlights:

In peer review of the testing and calibration performed on Tensar's geogrids by Giroud and Han, the question was raised why strengths at 5% were not used as the performance property for geogrid in this application. Dr. Giroud and Han provided clarity on this in their paper - Discussion of "Subsurface Characterization at Ground Failure Sites in Adapazari, Turkey". 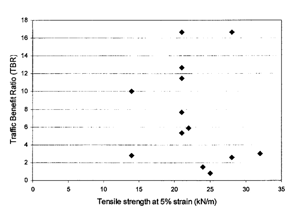 As Giroud and Han showed, there is not a correlation between the performance of geogrids and tensile strength. This chart, referenced by their report, shows data comparing tensile strength with Traffic Benefit Ratio (TBR). TBR is a performance measured based on test results. It is defined as the number of wheel passes (or plate cycles) to "failure" of a geogrid stabilized section to the number of passes or cycles of a non-stabilized section. As shown here, there is no correlation between geogrid tensile strength and roadbed performance.

This has been demonstrated in other full scale, highly controlled tests as well. In the early 1990s, the Corps of Engineers performed full scale wheel load testing on pavement sections stabilized with several different products. The Corps of Engineers tested 6 different biaxial geogrid products in a paved section. They measured the strengths of the products at different strain levels. (Max secant modules in this testing was defined as the tensile load per inch of width at different strains.) Here are the strength properties of the different products tested: 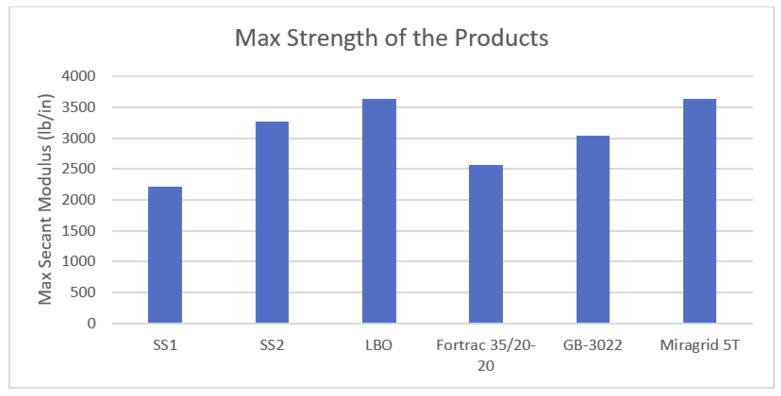 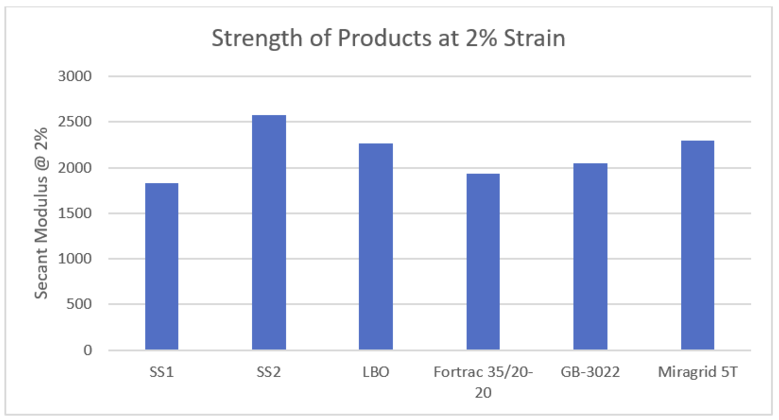 All of these products were then tested to compare performance. Testing was performed under tightly controlled conditions using an applied wheel loading. This graph depicts the actual performance of the products. Compare these results to the strength parameters. 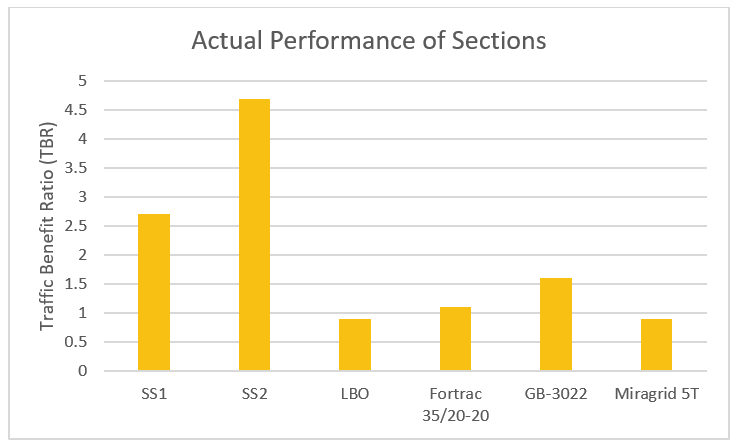 When the actual strains in roadbed applications are measured, it is found that the geogrids are only straining between 0.1% and 1.2%. Hence only a small fraction of the material's strength is being mobilized. As outlined in several other reports, geogrids provide significant improvement by preventing lateral movement of the base. This is a function related to the geogrid's capacity to provide confinement - not to its tensile strength.