The use of Recycled Asphalt Pavement (RAP) has become routine in road construction. The asphalt pavement milled off during repaving operations is a valuable material which reduces the raw material inputs for road construction. Until recently, the use of RAP was confined to the manufacturing of new hot mix asphalt. This has been a success story for the asphalt industry, eliminating the disposal of a valuable material and reducing the environmental impact of paving.

Using RAP in the conventional way, however, still requires the material to be transported from the project where it is generated back to an asphalt plant, and then transported back to a new project for installation (as part of the new hot mix asphalt). Recently, Tensar has helped complete several projects which use RAP in a different way: as a recycled aggregate material in a mechanically stabilized layer. Especially on reconstruction and widening projects where space is often tight and surrounding roads take a beating from construction traffic, this approach can deliver big benefits. The RAP can be used on the same project where it is generated, saving the cost, traffic, and resources required to remove the millings and bring in new aggregate material.

Of course, any change to the structural components of a pavement could have an effect on performance, so it was critical to verify that the mechanically stabilized layer using RAP would deliver the same or better structural capacity as the conventional design. Tensar coordinated state-of-the-art testing programs to validate the new approach in the field, so the contractors and agencies involved could move ahead with full confidence in the solution.

Last year, Tensar partnered with Tulare County in central California during the reconstruction of Avenue 144, a main arterial road outside the town of Tipton. In a test section of the project, TriAx Geogrid was used to construct a mechanically stabilized layer using RAP as the aggregate material, for testing against the original design. Test results demonstrated that sections utilizing TriAx and nine inches of RAP were stiffer and more resilient than those using ten inches of Crushed Miscellaneous Base. TriAx Geogrid stabilizes granular materials by confining the particles in the apertures of the grid and causing them to interlock with each other throughout the layer. This increases the stiffness and resilient modulus of the layer compared to unbound materials. Once the performance of the mechanically stabilized layer with RAP was confirmed, the rest of the pavement structure was built on top of the conventional and stabilized sections. RAP was processed on site, reducing the amount of material that had to be delivered to the site and resulting in a significant cost and time saving for the county. 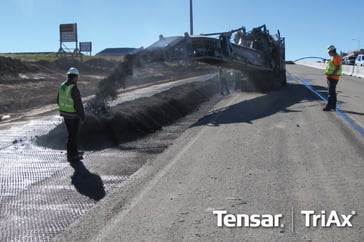 Tensar worked with the paving contractor and Colorado DOT during a large widening project on Interstate 25 near Denver. The site conditions required a substantial subbase layer, and the specifications called for a 24 inch thick layer, below a 6 inch aggregate base layer and 12 inches of rigid concrete pavement. Tensar developed a solution that replaced the 24 inch subbase layer and the 6 inch unbound aggregate layer with a TriAx Geogrid-stabilized base with 6 inches of RAP, a significant reduction in material from the 2.5 feet of conventional aggregate and subbase originally specified for this project. The performance of the stabilized section was validated in the field using APLT testing, allowing the contractor to demonstrate that this innovative approach would not adversely affect pavement performance.

The use of TriAx Geogrid in the stabilized base layer reduced the construction time by six months, decreased the amount of material transported to the site, and saved the state about $2 million. The reduction in truck traffic on surrounding roads reduced wear and tear on existing pavements, and also reduced traffic delays in the area.  In 2017 the project was recognized by the American Concrete Pavement Association (ACPA) with an Excellence in Concrete Paving Award.

These are just two examples of how mechanical stabilization using TriAx Geogrid provides improved pavement performance, in this case by allowing the use of recycled materials in the pavement structure. Tensar has demonstrated other applications where the use of recycled materials can deliver big benefits to both the bottom line and the environment, including the use of recycled concrete as fill material for retaining wall structures and aggregate for pavements. In every case, the alternate designs are developed so that project performance is as good or better than with the original approach, using the appropriate design methods and performance validation testing.

Did you know our staff is also able to help evaluate conditions and provide design assistance - at no cost to you? We have assisted contractors and engineers on thousands of projects and have the expertise, research and engineering to help provide cost and time savings to your projects.