The High Cost of Choosing the Wrong Soil Stabilization Solution

When soft soils are encountered on a job site, many contractors automatically turn to the same solutions they've always used. However, their "go to" method may not  be the cheapest or fastest and could actually cost them more in material costs or lost time on the jobsite. Take for example this recent project in Seattle. 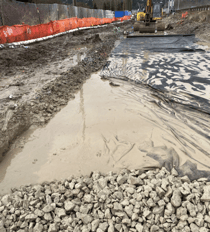 A contractor was building an access road over historic marsh land when the crew encountered a high water table and 10-15 ft. of soft soils. The original solution to stabilize the subgrade used a non-woven geotextile and 2-3 ft of rock. But the roads quickly rutted and became unserviceable for their heavy dump trucks. Time was of the essecence since the access road was critical for transporting a necessary drill rig. Lost productivity was the last thing they needed. 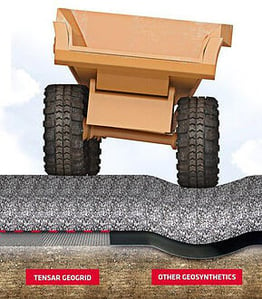 Many assume that geotexiles are a great solution to stop rutting because they equate high tensile strength with better in-ground performance. However, when it comes to soil stabilization, meaning the ground will endure intermittent loads applied from above (like heavy dump trucks), tensile strength won't get you very far. It has been widely documented that the ability to confine granular fill materials is the key to higer performance. 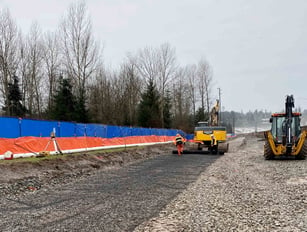 The contractor contacted Tensar who offered a soil stabilization solution using geogrid. A stabilization geogrid has apertures (openings) that allow granular materials to interlock. This interlock confines the granular particles to keep them from spreading laterally when loads are applied from above. This is why stabilization geogrid is recommended for applications such as roadways - a stiffer stabilized layer resists rutting and improves bearing capacity. A geotexile can't provide the necessary interlock which is why performance suffers. 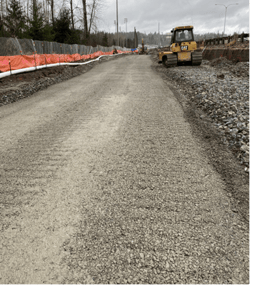 The Tensar geogrid design not only reduced the required aggregate thickness but also allowed the use of 3/4” aggregate instead of the expensive ballast rock needed with  geotextile. Ultimately, the contractor was able to recover valuable time with Tensar's geogrid solution and kept costs similar to the original budget.

Don't waste time or money on a soil stabilization method that can't guarantee performance. Get it right the first time with Tensar's proven geogrid techology and avoid unnecessary expense and downtime.