The use of geogrids for stabilizing aggregate fill materials is well documented. But geosynthetics may also provide a separation barrier between aggregate fills and subgrade materials. The following is a brief overview of laboratory and field examinations of the use of stiff Tensar TriAx Geogrids functioning as separators.

Create a Free-Draining Separation Barrier Between Aggregate Fills and Subgrades

Testing and experience have shown that TriAx Geogrids support the function of separation when properly graded aggregate fill is used. TriAx Geogrids are not prone to “blinding out” or clogging which may occur with a geotextile used as a separation layer.

TriAx Geogrids have been used for subgrade stabilization for over 30 years. During this period of time, they have been subjected to extensive testing by a variety of independent agencies. The tests have proven that geogrids provide a stabilized composite structure that is more effective than an unbound aggregate layer.

Identical pavement sections using two different Tensar Geogrids and a geotextile were tested in FHWA/MT-99-001/8138, conducted by the Department of Civil Engineering at Montana State University for the FHWA and the Montana Department of Transportation. This study concluded that, “For all test sections, mixing of the subgrade and base course aggregate was not observed, …”

In DOT/FAA/RD-92/25, performed at the U.S. Army Corps Engineers Waterways Experiment Station Geotechnical Laboratory, a similar finding was reported, “Geogrid confines the subgrade material below the base, preventing or limiting the amount of subgrade rutting upheaval from penetrating into or through the base material. Without geogrid confinement, rutting upheaval can penetrate through the base layer…”

The ability of geogrid to separate aggregate fill and subgrade soil has also been demonstrated in the field. In these cases, the geogrid was placed over the subgrade and the base course installed. After years of use beneath heavy equipment and fully-loaded trucks, the base course was exhumed to observe if there was significant intermixing of the subgrade and aggregate fill material. The photos below show that geogrid effectively maintains separation.

Referencing this project, Morten Vanggaard of Franck Geoteknik AS, Denmark, stated: “The separation function of the long-established geogrids has been observed on several occasions.

It was recorded on a truck parking area project in the UK in 1995 after an installation period of eleven years. The following observations were made at the time of inspection: 1) The interface is distinct. There is no evidence of upward pumping of the cohesive subgrade or downward migration of the sub-base. 2) The geogrid is flat and level.” Note: Before beginning any project, please consult with your local Tensar representative to assure optimum performance and verify fill specifications. See below for information on proper fill gradation to assure adequate filtration.

While it is not intuitive that a geogrid with open apertures could provide separation, the underlying science is relatively simple. The geogrid acts with the well-graded aggregate fill to create a filter that effectively stops the migration of fine subgrade soil particles. Consider the following:

1) A closed planar surface material, e.g. a geotextile, is not necessarily required to prevent intermixing. The mechanism is similar to that of a snowshoe which has open apertures, yet the snow does not seep through them. The snowshoe distributes a man’s weight over a wide area, allowing him to walk on material that would not otherwise support him. TriAx Geogrids work much the same way over a weak subgrade. The load is distributed over a wider area of the subgrade, reducing pressure on the subgrade, and therefore, reducing the tendency for intermixing at the boundary.

2) Consider how a sieve functions. A ½-in. sieve does not allow all of the particles smaller than ½-in. to go through unless the sieve is vibrated. TriAx Geogrids interlock with fill and inhibit movement at the base-subgrade interface. Movement is what causes the subgrade to “pump” up into the base course. Without movement, typical well-graded aggregate base material forms a filter (see chart below) and pumping does not occur. Thus, the base aggregate will not be contaminated. 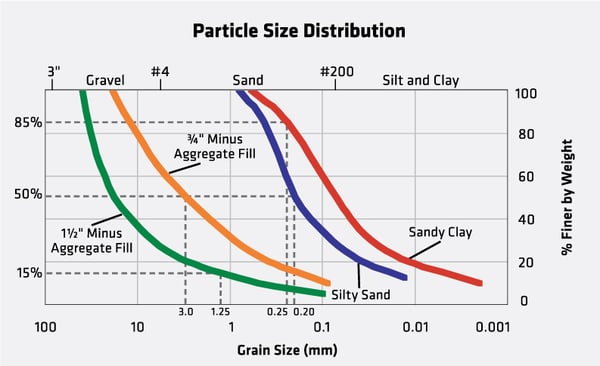 3) Also consider the stabilization effect of a stiff geogrid. TriAx Geogrids act to inhibit movement within the aggregate fill, preventing lateral movement of the base away from the load. The aggregate interlocks with the grid, and the grid resists fill movement. This stabilization of the base layer also occurs in the vertical direction and in the plane of the grid itself. The internal friction of the aggregate and arching of the fill over the ribs of the grid results in vertical movement restriction. The base course material therefore acts in a more “monolithic” manner, resisting vertical and lateral displacement.

4) Finally, consider the durability of structures built with TriAx Geogrid. The failure mechanism of a base course is often related to the contamination of the base aggregate. Even 10% contamination can cause a significant loss of friction between the base particles. Without this friction, the aggregate will move away from the load, leading to rutting and pavement failure. TriAx Geogrid provides more durable base layers. If it did not separate the subgrade from the base, then it could not effectively stabilize the aggregate. The contamination of the base aggregate by subgrade pumping would weaken the base layer. Base layers become stronger when using TriAx Geogrids, as they remain unfouled by subgrade fines.

TriAx Geogrids support the function of separation when a properly graded fill is used for the site and subgrade conditions. Guidance on natural filtration has been outlined above. Seeing is believing – exhume your own section and examine the interface.

Want to see the calculations behind the chart featured on this post?