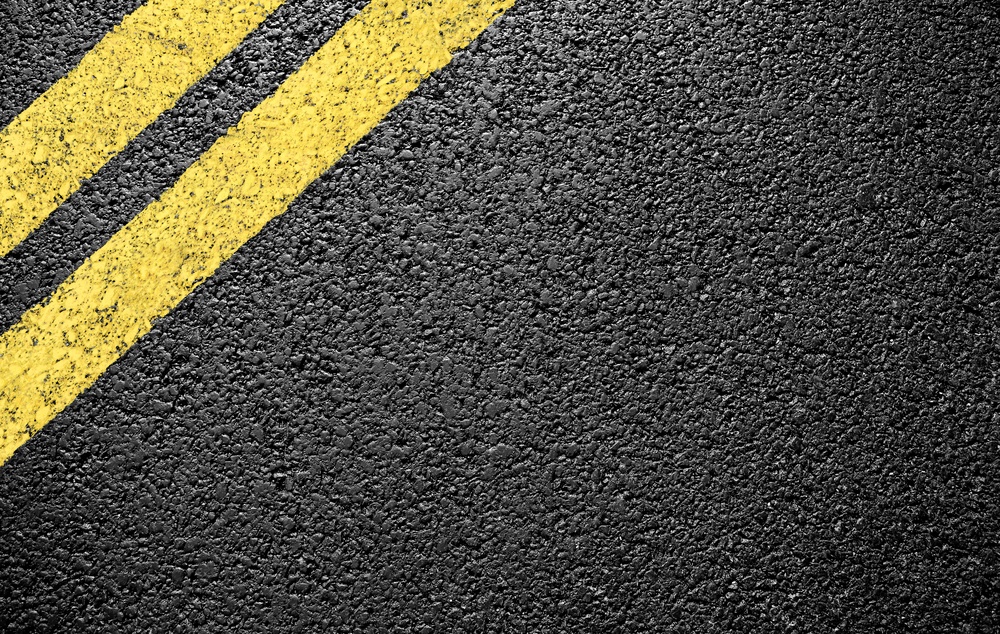 As pavement sections constructed more than 20 years ago come to the end of their design life and traffic demands increase, continual reconstruction and widening of local and state roads are being performed. Many of these improvements are in urban areas where the time and expense of hauling out materials from demolished pavement, and trucking in new raw materials to the project site, are significant. Additionally, the ancillary traffic loading on adjacent streets as well as traffic congestion is problematic for the owner and residents. For these reasons using recycled materials for roadway construction is becoming more prevalent. An economical alternative consists of crushing and processing the onsite materials (AC or PCC) or using existing on-site aggregate base as road base. 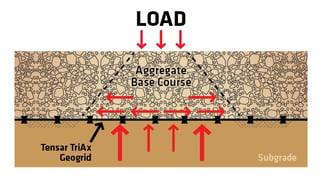 Tensar approached Tulare County about incorporating TriAx Geogrid into the roadway section of the Avenue 144 reconstruction project. Adding TriAx Geogrid between the subgrade and aggregate base materials, is an effective method of creating a stiffer and more uniform foundation that will maintain integrity over time by improving the load transfer. This composite section of TriAx and aggregate base creates a mechanically stabilized layer (MSL). The TriAx enhancement results in less deformation during construction, and during the pavement’s life. This is accomplished by TriAx interlocking with and confining the aggregate base. The confinement reduces the potential for contamination of the aggregate base with the subgrade soil and the MSL provides a resilient layer that minimizes the potential for differential movements of the pavement surface that initiate structural distress. This also moves the critical failure layer into the surface course which creates a “perpetual pavement” that provides preferred, cost effective maintenance options. Additionally, an MSL with TriAx Geogrid allows for the reduction of aggregate and asphalt thickness while providing equal or greater performance benefits. Tensar proposed a reduction of ½’ of asphalt and 5.5” of aggregate base course material. Additionally, the Tensar alternate design utilized reclaimed asphalt as aggregate base course material. These options offered Tulare County significant savings in both materials and construction time. 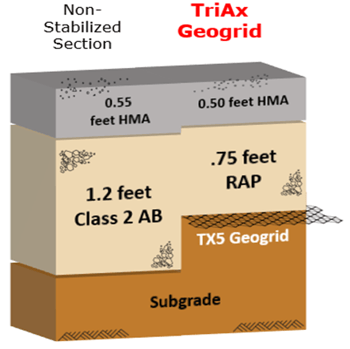 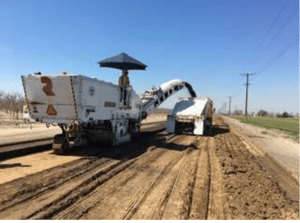 Tensar agreed to conduct post-construction performance field validation to verify both the performance of the TriAx mechanically stabilized layer and to demonstrate that TriAx Geogrid used with Reclaimed Asphalt Pavement (RAP) or other recycled materials provides equivalent or superior performance compared to equivalent aggregate base or RAP sections. 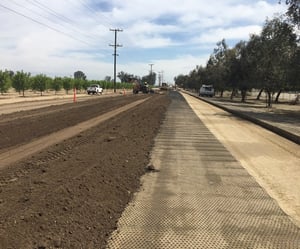 Tensar conducted multiple Automated Plate Load Tests (APLT) to measure the improved performance of aggregate base (recycled and virgin aggregates) with TriAx. The thickness of the aggregate sections tested ranged between 4 inches and 18 inches. For this specific test a nominal 9 inches of RAP was evaluated. This material was pulverized in-place and loaded directly into belly-dumps for use as aggregate base. The exposed subgrade was then compacted in accordance with project specifications to achieve a firm and unyielding subgrade. TriAx Geogrid was then rolled out on the subgrade and the pulverized RAP material was placed on the TriAx. A test section was located within the limits of project. The following diagrams present the RAP sections evaluated using the extended cycle (10,000) APLT for this project: 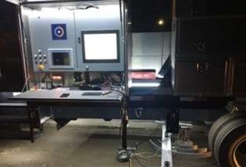 Ingios® performed a series of Automated Plate Load Figure 1 and Figure 2 demonstrate the benefit of the MSL. These graphs show the permanent and recoverable deformations with a 10,000-cycle plate load test with an applied pressure of about 15 pounds per square inch on a 12-inch diameter plate. This repetitive loading simulates traffic loading over time. In this case the loading applied is more than double what the surface of the aggregate base, below the wearing surface, will experience during the life of the pavement. The critical measurement parameter with this test is the deformation of each system. The control section without geogrid showed about 4 times more permanent deformation than the TriAx section over the 10,000 cycles.Test’s (APLTs) at the subject site. APLT is a system developed to perform fully automated static and repetitive/cyclic plate load tests, per AASHTO and ASTM test methods. For performance validation the measured deformation between the control sections and TriAx test sections are compared with stress dependent resilient modulus testing and extended 10,000 cycle tests at a constant stress. 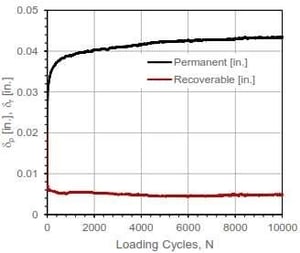 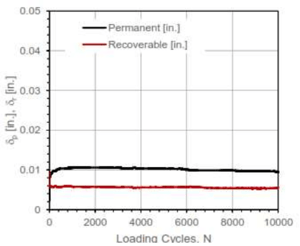 Why is deformation significant?

Figure 3 shows the resilient modulus of the aggregate base versus the applied normal stress using a 12- inch diameter plate. One-hundred cycles testing were performed at different stress states, depicted by the blue and red dots in Figure 3. The results demonstrate that 9 inches of RAP, underlain by TriAx Geogrid, was more resilient to loading when compared to the control section with 10 inches of Crush Miscellaneous Base. 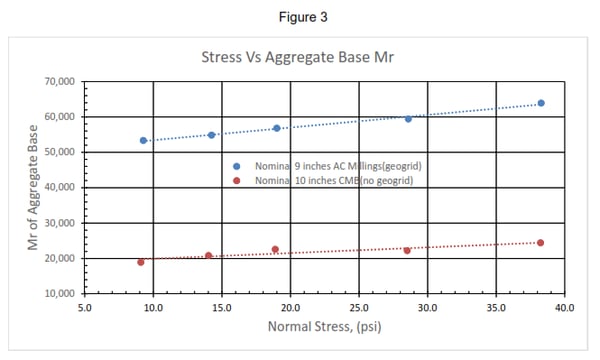 Why is the resilient modulus(Mr) of the TriAx section improved? 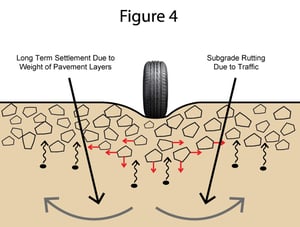 What is the range of grainsize distributions that can be used with TriAx Geogrid? 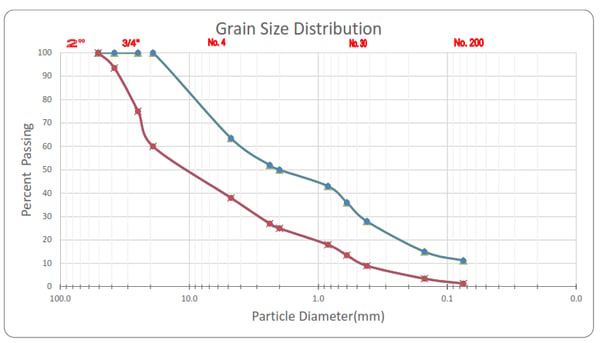 The chart above is a compilation of more than 13 types of aggregate bases that have been tested using the APLT method to verify the improved performance with TriAx Geogrid. The lines on the chart represent the range of preferred grain size distributions that can be used with TriAx Geogrid. The materials tested included: RAP, Crushed Concrete, Crushed Miscellaneous Base, VirginAggregate Base, and Salvaged Base.

Materials that fall between these ranges have proven to have optimal performance with TriAx Geogrid. This includes materials that are 100% RAP, 100% concrete or a combination. This does not exclude other types of aggregate bases. However, for optimal performance aggregate bases that fall within the gradations above will perform better. In summary, the testing shows that TriAx Geogrids improve the performance of well graded granular materials through mechanical interlock.

The testing here demonstrates that using recycled materials placed on TriAx Geogrid provides improved performance compared to the control sections without stabilization. Benefits of including TriAx within the planned pavement section include:

The results of the testing are consistent with the findings of the Accelerated Pavement Testing of over 150 APLT’s performed on sections enhanced with TriAx Geogrid. Results can vary depending on the quality of the aggregate, type of geogrid and subgrade strength.

Tensar Under Every Road 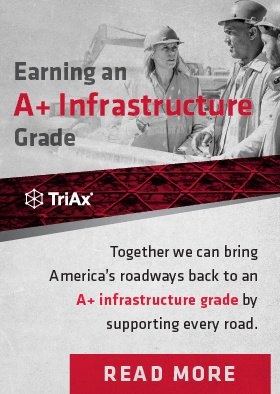 Latest Updates to the Tensar Blog

Join over 80,000 others who are following our blog and finding strategies to beat infrastructure failure.

How Corporations Can Ignite Change for  Resilient Infrastructure

Resiliency vs. Sustainability: What's the Difference?