Prove it! How Does the GlasGrid System Really Perform Over Time?

The traditional remedy for addressing cracks in pavement has been to install a thicker asphalt overlay. Although this solution is cost-effective and solves the immediate issue, it’s only a matter of time before the cracks returns. Constantly playing “catch-up” is not an efficient strategy for maintaining roads.

You may have heard that pavement interlayers like the GlasGrid Reinforcement System can significantly improve the service life of pavements since they resist the mitigation of reflective cracking. But, with the higher price tag, are interlayers worth the extra expense? Of course, there are many types of interlayers with varying degrees of performance. Some may be worth it and some not. GlasGrid claims to increase pavement service life by 200% or more – which would effectively end the constant cycles of re-paving. But, is that claim too good to be true? Let’s look at three real world examples to see how GlasGrid performed over time. 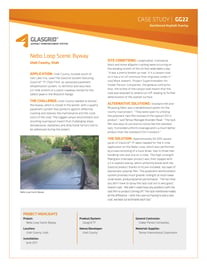 Utah County needed to bolster the Nebo Loop byway with a quality pavement system that protects against reflective cracking and reduces the maintenance and life-cycle costs of the road. The rugged canyon environment presented several challenges related to temperature, dampness and directional factors. Also, the incline of the canyon wall meant that the road was exposed to severe run-off, leading to further deterioration of the asphalt surface. Approximately 60,000 square yards of GlasGrid® TF were needed for the 5-mile application. The high-strength fiberglass interlayer product was then topped with a 2 in asphalt overlay, which uniformly bonds with the GlasGrid product thanks to its pre-installed, top layer of elastomeric polymer film.

The Results: In October 2019, after 8 years of service in the extreme mountain temperatures, the site was revisited, and the roadway surface is in good condition. Cracking of the old underlying pavement was not observed at the surface. 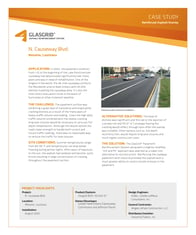 The pavement condition N. Causeway Blvd. had deteriorated significantly. The level of distress was significant and this led to the rejection of a simple mill and fill (3”-6”) strategy fearing the cracking would reflect through soon after the overlay was installed. Other options such as full depth reconstruction would require long lane closures and much higher construction costs.

The GlasGrid® Pavement Reinforcement System along with a slightly modified “mill and fill” approach was selected as a lower cost alternative to reconstruction. Reinforcing the roadway pavement with GlasGrid provided the asphalt with a much greater ability to resists tensile stresses in the pavement.

The Results: The project site was re-visited in 2019. Over the last 17 years, this 1.5 mile section has performed extremely well and remains essentially crack free, even through significant weather events such as Hurricane Katrina in 2005. Although a few small cracks can be found in the area immediately next to the curb, the main travel section areas are crack free. Over the same time period, the section of N. Causeway Blvd that is located south of Veterans was rehabilitated without GlasGrid® and is demonstrating a large degree of cracking. This section will soon need to be rehabilitated.” 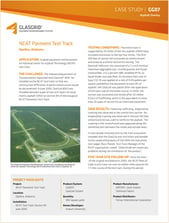 The Alabama Department of Transportation requested that GlasGrid® 8501 be installed on the National Center for Asphalt Testing (NCAT )test track so that any construction difficulties or performance issues could be documented. In June 2000, GlasGrid 8501 was installed between a pair of two inch layers of stone matrix asphalt (SMA) on section W1 of the inaugural NCAT Pavement Test Track. The first 100 feet of section W1 contained no reinforcement and acted as a control section for testing.

2006 Results: The section was excavated and tested after 20 million ESALs of trafficking, which is the equivalent to more than 20 years of service for an interstate pavement. Longitudinal cracking was observed in the control test section and appeared along the centerline joint between the inside and outside lanes. No longitudinal cracking was observed in the last 100 feet where GlasGrid was used to reinforce the asphalt.

2011 Results: By this time, the NCAT fleet of triple trucks had run over six million miles around the 1.7 mile course of the test tack. Over 40 million ESALs of accelerated pavement damage have been induced, the equivalent of approximately 60 years of load induced damage for the typical interstate. Due to the high quality of the SMA mix sandwiching the GlasGrid product, there was no significant difference in performance found between the first 100 ft (the control section) and the last 100 ft (the GlasGrid System treated section). However, longitudinal cracking was found in the control section along the centerline joint and between the inside and outside lanes while no longitudinal cracking was observed in the GlasGrid treated section.

2018 Results: The NCAT site was visited once again after 60 million ESALs of loading. Observations revealed that the unreinforced section had more cracking present in addition to the joint cracking first observed in 2006. Also, there was now random cracking within the lane area as well as additional cracking extending from the centerline cracking. As for the GlasGrid reinforced section, cracking was now appearing, however, it is limited to only the 18 year old construction joint.

If you would like to learn more about GlasGrid and how it can become a valuable part of your pavement maintenance strategy, visit our online resource center.