Some cities are building expensive seawalls and water pumps to fight the increased flooding and land loss brought on by climate change. For the Native American Pointe-au-Chien Tribe in southern Louisiana, oyster reefs are helping to reduce the rate of shoreline erosion that threatens their sacred burial grounds. A recent study found that a key to building these reefs up may just lie with Tensar’s Triton Marine Mattress System. In a partnership with a researcher from Nicholls State University, the tribe hopes to install the Triton Mattresses in the parish’s coastal canals to foster the creation of protective oyster reefs.

As climate change and subsidence begin to endanger America’s coastal communities, city and state governments are struggling to stand their ground as it literally sinks below them. Larger cities such as Miami and Atlantic City are constructing seawalls and water pumps to fight back against the rising waters, but community members from Terrebonne Parish in southern Louisiana are betting on a different strategy: oysters.

Terrebonne Parish lies along the Gulf of Mexico, and of its total area of 2,082 square miles, 41 per cent (850 square miles) of that is water.  Rising seas are eating away the shoreline at an alarming rate, including the location of sacred burial sites for the Native American Pointe-au-Chien Tribe that calls the parish home. But the tribe is choosing to fight back, enlisting the help of Dr. Earl Melancon—a professor from Nicholls State University who studies coastal restoration—to facilitate the growth of oyster reefs along sections of the coast. 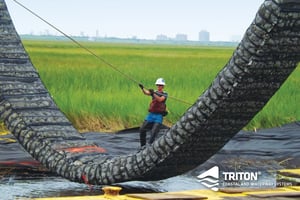 Melancon was previously involved in a seven-year-long study of shore protection methods along with the Coastal Protection and Restoration Authority of Louisiana (CPRA). Spanning from 2008 to 2015, Melancon and the CPRA measured the effectiveness of three different methods of shore protection.  Tensar’s Triton® Marine Mattress System was compared against a permeable matrix of interlocking concrete armor units and an artificial reef design made from steel and recycled oyster shells.  Of the three methods tested, the Marine Mattresses created a much friendlier oyster habitat and thereby a larger oyster population.  They also proved more effective than the other two alternatives at curbing shoreline loss, both in terms of cost per linear foot and meters of shoreline loss per year.

A polymeric marine mattress or “gabion mat” is a cage structure composed of strong yet flexible Tensar® Geogrid filled with aggregate.  The mattresses are placed perpendicular to the shoreline and contour to it in a way that creates a gradual transition which dampens wave energy before it hits the shore. “The sloping gave opportunity for oysters to colonize more readily, and that allowed for the creation of more reef structure,” Melancon said in an interview with Tensar. He further explained that the formation of reefs cushions the impact of waves on the shore, which in turn reduces overall shoreline loss.

The Pointe-au-Chien Tribe has been working to gain recognition from the U.S. federal government, which would help to better equip them in preparing for the massive amounts of land loss due to climate change. Until then, Tensar’s Triton System will prove to be a powerful tool for protecting their sacred burial grounds from encroaching waters as the tribe partners with Dr. Earl Melancon and other scientists from around the country to build up oyster reefs in the waters of Terrebonne Parish.

Triton® Marine Mattress: This geogrid structure is filled with aggregate and was developed for erosion control and submerged foundation applications. Construction and protection projects along eroding coastal areas and waterways are among the most challenging to undertake. Did you know our staff is also able to offer knowledgeable site assistance to help evaluate conditions and provide design assistance - at no cost to you?

We have assisted coastal engineers a variety of coastal and waterway construction and protection projects. We have the expertise, research, and engineering to provide durable solutions that reduce costs to even the most difficult conditions.

Want to design for better protection of coasts and waterways? Learn more about Tensar's solution: