Prior to the construction of the Manahawkin Bay Bridge project in New Jersey, scour conditions were identified during regular inspections conducted by the NJDOT. As a result, the FHWA requested that an updated scour analysis be performed at the three Thorofare Bridges. The bridges were determined to be scour critical and the NJDOT proposed scour protection at each of the three bridges to maintain stability of the structures and safe roadway conditions. 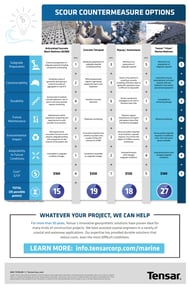 Several scour protection methods were evaluated including marine mattresses, articulated concrete block mattresses, A-jacks and riprap. Each method was rated on a scale of 1 - 5 (where a score of 5 indicates optimal performance) in various areas such as "constructability," "future maintenance," and "environmental impact." This chart summarizes the scores for each type of scour protection and the commentary for the scores can be found here. 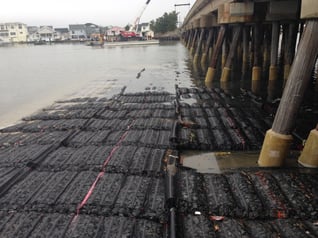 The analysis concluded that Tensar's Triton Marine Mattress proved to offer the most ideal solution. It had the thinnest profile and required minimal bed preparation prior to installation. Its size also created a large, stable and protective mass during scour events. Triton Marine Mattresses were installed on the Manahawkin Bay Bridge project in January 2017. The site was revisited 18 months later and signs of oyster and SAV growth were noted. Read more about this award-winning project.

Flexible and resilient, Tensar's Triton Marine Mattresses adapt to the most difficult conditions, provide durable solutions that reduce costs, and resist scour far better than rigid systems. Tensar offers resources for those who want to combat coastal and waterway erosion the better way, including an on-demand webinar and examples of successful projects.