Chemical soil stabilization methods like cement, lime, and fly ash are popular choices for strengthening poor subgrades. But, do their popularity rest on misunderstandings? The low initial cost of chemicals may be attractive, but other factors that go into proper installation like soil compatibility, curing time, and specialized equipment needs are often overlooked. There are also steep penalties for environmental statute violations and uncertainty surrounding its long-term performance.

It’s time we re-examine chemical stabilization and compare it to proven mechanical stabilization with geogrids. Tensar multi-axial geogrids are the most advanced in the industry. They enhance the performance of poor soils by interlocking unbound aggregate materials. As the granular material strikes through the geogrid openings it becomes laterally restrained and obtains a higher degree of confinement. This stiffer, stabilized layer resists rutting, improves bearing capacity, and increases traffic capacity.

No contractor wants the financial responsibility of fixing a problem that occurs when subgrade stabilization fails. However, mechanical stabilization with geogrid is backed by decades of research so contractors can rest assured that headaches, like rework, can be avoided. 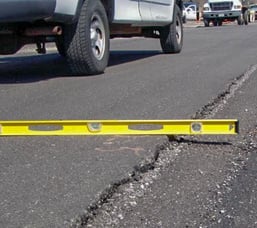 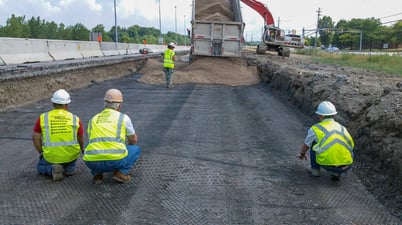 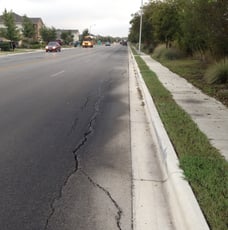 A subdivision located in central Texas was constructed over very expansive clay soils (high PI - 30 to 60). Variable moisture conditions from the rainy and drought cycles created extreme shrinking and swelling of the clay subgrade. Initial construction phases included pavement sections that incorporated either lime stabilization or additional flex base to combat the expansive clays. However, the roadways still experienced significant movement, cracking lanes, and edge cracking within the initial years of operation which lead to unexpected high maintenance/repair costs.

Tensar offered a soil stabilization solution using multi-axial geogrid to optimize the pavement sections. Studies have shown that the use of multi-axial geogrid can mitigate the effects of expansive soils and increase long-term performance. The residential roads showed significant improvement and the Tensar solution was used in the design of the remaining construction phases. 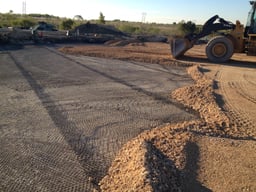 Chemical vs. Geogrid: A Head-to-Head Comparison

The benefits of choosing Tensar geogrid over chemical methods for soil stabilization have been well demonstrated for all phases of construction. We developed this chart based on a recent article in Geostrata Magazine that gives a convenient side-by-side comparison of the pros and cons.

Don't waste time or money on a soil stabilization method that can't guarantee performance. Get it right the first time with Tensar's proven geogrid technology. 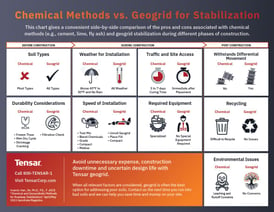