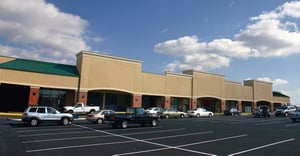 Many private sites are designed with both a thick, heavy-duty pavement and a thinner, light-duty pavement to account for variability in traffic. Often times, these varying pavement thicknesses are directly adjacent to one another, causing design, construction and maintenance problems. The most significant being that water entering the pavement tends to accumulate in the “bathtub” created by the thicker heavy duty section (see Design Scenario 1 below.) The subgrade strength decreases and the base becomes saturated which results in a weaker pavement in the area where the greatest strength is required.

Advantages of Uniform Subgrade Elevations
There are many advantages to creating a uniform subgrade elevation for adjacent heavy and light duty pavement sections:

TriAx Geogrid for Uniform Subgrade Elevations
TriAx Geogrid technology from Tensar can be used to create a scenario whereby the heavy and light duty sections are the same thickness. Consider the two sets of designs illustrated below and make note of the highlighted reductions in pavement and aggregate sections resulting from the integration of TriAx Geogrid. The enhanced performance of pavements stabilized with TriAx derives from the positive interaction between TriAx and aggregate. Penetration of the coarser particles through the openings of TriAx results in “mechanical interlock”. This increases the stiffness of the base course layer and prevents lateral spreading of the aggregate during traffic loading, allowing thinner pavements stabilized with TriAx to perform structurally better.